Kristal Piksel 2017 finalists have been announced

Developers of the games which will be judged by jury at the Kristal Piksel Video Game Awards, where the best games of Turkey will be determined, will receive awards at the Istanbul Congress Center on December 8th.

Kristal Piksel (The Crystal Pixel) Video Game Awards ceremony, organized by the Turkish Game Developers Association (TOGED) and METU TEKNOKENT ATOM, will take place at the Istanbul Congress Center on December 8th within the scope of the Turkey Innovation Week.

Fifty three games from mobile, console and VR platforms have competed and these twenty four of them are finalists. 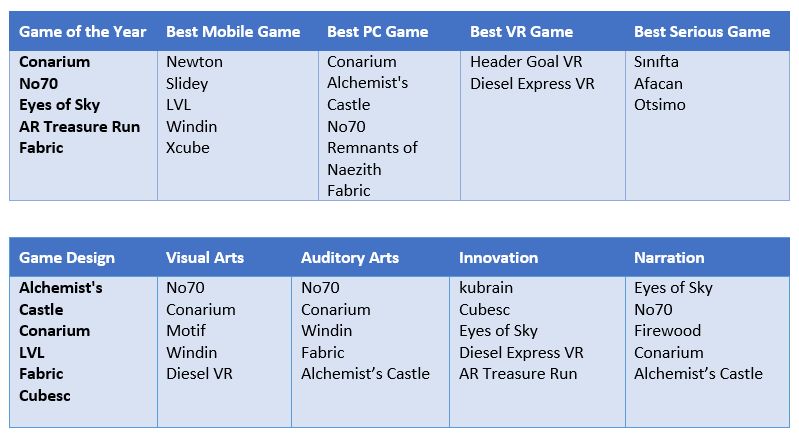 Sponsored by Gaming Istanbul (GIST) this year, Kristal Piksel is helping Turkish developers get better recognition in the industry and society. TOGED Chairman Ali Erkin stated that they aim to contribute both to the development of the industry and to raise awareness for game development with Kristal Piksel. “In our sector, which is in need of trained workforce, it is very important for the developers to trust and be part of the industry. Kristal Piksel is an important source of motivation in this sense. The recognition of achievements in the presence of people and the shift of the negative prejudice for the gaming pave the way for the game studios and developers to do new titles and successful business. “

People from the academy and media are in the jury

Organized by GIST and Shift Communications Consulting, Kristal Piksel’s awards were sponsored by GIST, ASUS and Sony Playstation. Its communications was sponsored by Setipr, and the press sponsorship was handled by Merlin’in Kazanı and Oyungezer.

In addition to the awards given by the award sponsors, the Game of The Year will be directly participating in the Indie Prize contest held under the Casual Connect Europe by skipping the preliminaries. The developers of the game will also receive two “all-access pass” tickets and free accommodation during Indie Prize Contest under the GIST sponsorship.